An essay on JAAKKO Stenros's talk 'Aesthetics of action: Ephemeral, embodied, co-creative and rule-bound nordic larp' by Zara Worth 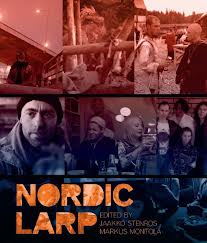 For those of you who, like myself, were previously unaware of LARPs, of what it is ‘to Larp’ or ‘go Larping’; LARP (Live Action Role-Play) is a recent descendant of RPGs (Role-Playing Games). In the context of the BALTIC symposium; Death Animations, Jaakko Stenros’ talk Aesthetics of Action: Ephemeral, Embodied, Co-Creative and Rule-Bound Nordic Larp may seem a little off-beat and even irrelevant. However, Stenros’ presentation conferred an intriguing insight into a fairly unmapped sub-culture, with perhaps unrealised potential within a ‘Contemporary Art’ framework.

Similarly to the Art world, the Larping community is relatively insular, and like any cultural substructure, there is a full spectrum of experiences available to the Larping individual. At one end your British Zombie Larps, which if anything are an extension of a night out on Halloween in Newcastle. At the other end, there is Nordic Larp whose aim may be to entertain flights of fancy, but emphasis is also placed on acquiring meaningful experience (note here I say meaningful, not necessarily positive). These Nordic Larps are much more serious, theoretically engaged and as with any elite are equally more expensive and fewer in number. There are clear differences between Larping in different countries: while Nordic Larping has grown into a lucrative business encouraging academic engagement and critical thinking, much of British Larping has clung to the individual’s freedom to choose characters and scenarios, the organisers having a much looser hand, a position which has led to much more anti-academic and anti-theoretical forms of Larping developing in Britain.
Nordic Larp meshes together theatre and performance arts with gamer culture and has developed as a form of expression and self-exploration; it has the potential to engage with the collective and the political, as much as with the intimate. Once compared to Relational Aesthetic Art, the boundaries between Larp and Art seem a lot more blurred.

‘It is not what you see that is important, but what takes place between people’.

The success of Nordic Larp hinges on four key rules: The Character Rule, The Pretending-Together Rule, The Power Rule and the World Rule. In its most developed form, the potentials of Larp are comparable to the effects of theatre. When at the theatre, the verisimilitude of the actors’ performances enables the audience to engage with the plot, actors become conduits for the audience to experience a variety of emotions and explore diverse themes. Take away the stage and the actors: in Larp, the audience is player, actor, audience and creator; there is no specific script. Props and costumes enhance the make-believe, but what is most important is the exchange between participants and the experiences triggered by scenario and interaction. Now compare this to Relational Aesthetic Art works, such as Rirkrit Tiravanija’s interventions in gallery spaces, serving food to spectators as in Untitled (Free) (1992) where the ‘work of art’ is in the exchange between spectators, who by eating the offered Thai curry and experiencing the kitchen within the gallery are also in turn creating the ‘artwork’ through their own social interactions, creating both individual and collective experiences.

Really the only difference here is that the ‘world’ and ‘characters’ are fictional in Larping; the potential for meaningful exchange and emphasis on interaction between people is still present.

‘Role-playing games are also a tool for exposing...’

One of the most famous Larps to date is the Ground Zero Larp held in Finland (1998), in which the participants ‘experienced’ a fabricated nuclear missile crisis based on the Cuban Missile Crisis of 1962. Stenros used the term ‘positive negative experience’ when discussing Ground Zero, the premise of which centres around the theory that through constructed traumatic experience the participant can learn valuable life lessons. This sentiment is similar to the recent TV experiment Apocalypse (2012) by Derren Brown, in which Brown led the unsuspecting Steven to believe that the world was going to end as a result of a meteor shower. Although ethically Ground Zero and Apocalypse exist on different planes, both ask whether an individual can gain meaningful experience through a fictive constructed scenario. They also pose questions on the long term effects of intentionally inflected trauma on an individual, willing or not.
Artist Brody Condon’s two-channel video installation To Prove Her Zeal (2012) documented a five day Larp where participants imagined themselves inhabiting an isolated mill-tower in Wassaic, New York as part of a monastic/new age retreat/extra-terrestrial biosphere. Here the artist created a complete fictional world, which the video merely documented. The concept of creating an almost self-sufficient and continuously developing artificial world is a fascinating one; however it does not plunder the power of the Larp to explore an issue on raw personal levels.

One of Larp’s most exciting potentials seems to be when opportunity arises for dialogue outside the players and organisers, at moments when the play overflows out of the ‘world’ and meets reality. However, you get a ‘certain type’ of person who will visit an art gallery, limiting the artist’s engagement with the public (like with Tiravanija’s work), in the same way a ‘certain type’ of person will be involved in Larping. If the British Larping community continues to reject academic involvement perhaps the British Art community has a niche to fill, with a Larp/Art cross-over allowing the spectator to participate in a Larp as they might in a Mike Nelson installation. Anyway, the Nordic Larp is certainly a potent form of expression and it would be foolish to undermine this ‘playing’ so early on in the development of what could be the forefather of performance art’s next generation.